The pearl necklace is a classic for a reason. Pearls are among the most beloved gemstones of all time. Occurring in a wide variety of sizes, shapes and colors, they can be dainty and feminine or modern and bold. They also hold a certain allure thanks to the way that they form. Unlike diamonds, sapphires, rubies and emeralds, which are created over thousands of years deep below the earth’s surface, pearls are formed in a relatively short period of time in our rivers, streams, seas and oceans. Their color and size depend primarily upon the type of mollusk that creates them — there are as many different types of pearls as there are species of oyster or mussel. From natural to cultured, freshwater to saltwater and round to baroque, there is a pearl type and shape for everyone. Read on to learn more about the many types of pearls. 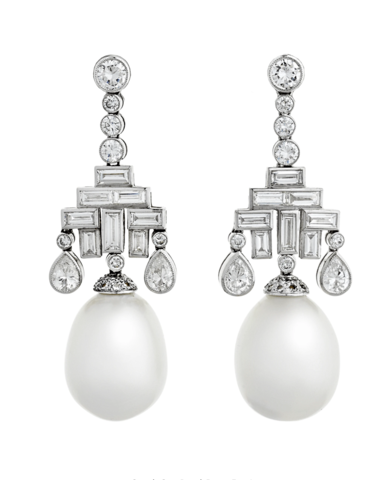 WHAT IS A PEARL?

Before discussing the different types of pearls, one should have a basic understanding of how a pearl is formed. Though classified with other precious gemstones such as diamonds, a pearl is not a stone; it is formed by a living organism, the mollusk. The process of their creation is fascinating. When an irritant enters an oyster, mussel or clam, a defense mechanism is triggered that causes the mollusk to produce a fluid to coat the irritant in several layers. Ultimately this layering creates the “nacre” of the pearl — its iridescent outer coating. Nacre is the same basic material as mother of pearl, which is the inside coating of certain shells. This process takes a long time by human standards – nearly three years — but in comparison to the diamond, which takes between 1 billion and 3.3 billion years to form, it is a mere blink of the eye. 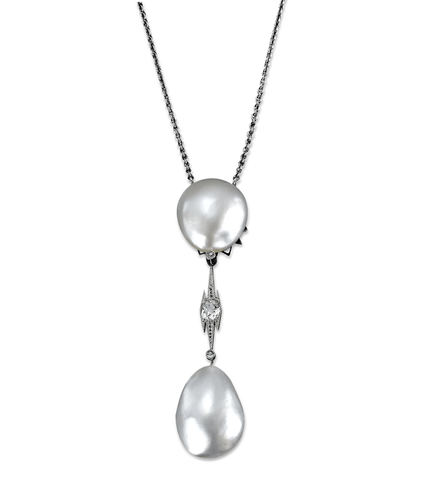 Natural pearls are extremely rare and highly coveted. It is estimated that only one in approximately 10,000 oysters that live in nature will ever produce a pearl. Furthermore, of those rare pearls, an even smaller percentage will form in a desirable shape and color. Therefore, before the development of cultured pearls, these organic gems were among the most sought-after materials in the world due to their rarity.

Today, natural pearls have virtually disappeared from the jewelry market due to a number of factors, including pollution and overfishing. They can generally only be found in antique and estate jewelry, and they command very high prices. 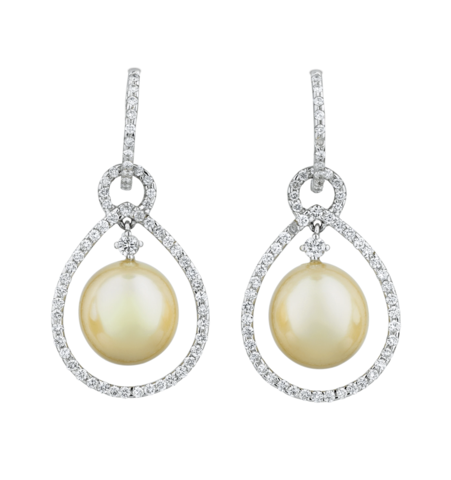 Cultured pearls are those pearls that are grown artificially in a process developed by the Japanese in the early 1900s. First, the mollusks themselves are bred and raised specifically for producing pearls. Once they are grown, skilled technicians insert the nuclei — usually a shell bead — into each mollusk. These nuclei act as the irritant that triggers the secretion of nacre, forming the iridescent layers of the pearl. Because shell beads are almost always round, most cultured pearls are generally also round, while many natural pearls occur in more irregular, or Baroque, shapes.

The primary physical difference, however, between a natural pearl and a cultured pearl is the thickness of the nacre. In order to speed up the process of creating the pearl, cultured pearls are usually embedded with an irritant that is larger than one that would occur in nature. For this same reason, it is relatively easy for gemologists to distinguish between a natural pearl and a cultured pearl. A simple x-ray of the gem will reveal the type of nucleus that led to its formation.

Saltwater pearls are gems created by oysters in the seas and oceans of places such as Thailand, Australia, Japan, Indonesia and Tahiti, among others. There are a number of highly distinctive types of saltwater pearls — read on to learn more! 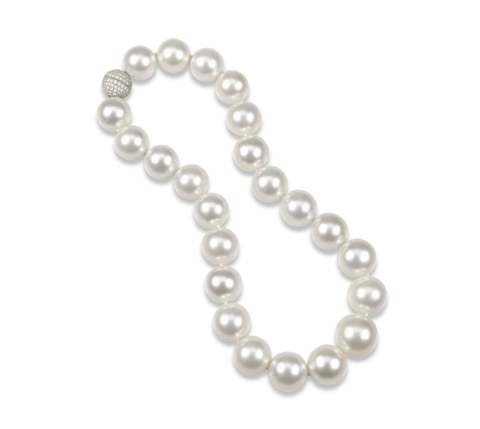 South Sea pearls from the warm waters of the South Pacific have long been cherished for their soft iridescence, radiant luster and incredible size. The Philippines, Australia and Indonesia are the primary sources of these cultured saltwater pearls, though Myanmar and Thailand are also important producers. While many of these pearls measure around 8mm to 18mm in size, they can reach up to 21mm in diameter.

Their large size is thanks to the oyster that produces them — the pinctada maxima, the largest oyster in the world. This monumental mollusk occurs in two varieties: the Silver-lipped oyster and the Gold-lipped oyster. The former is known to produce white and light silvery pearls, while the latter creates cream and golden pearls that are equally coveted. 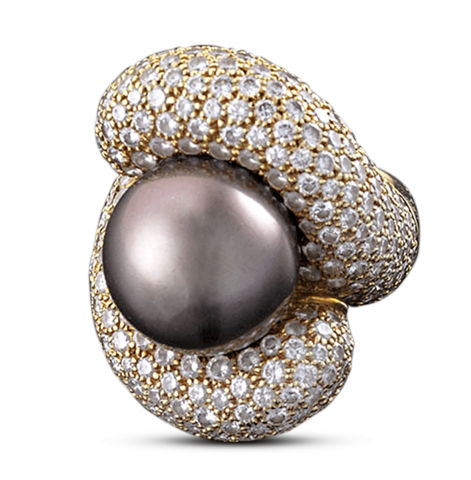 As the only pearl variety that is naturally dark in hue, Tahitian pearls are beloved for their rich black and silvery hues. While they are called “Tahitian,” Tahiti itself isn’t the only producer of these gems; they are cultivated around all the islands of French Polynesia. They are made by the pinctada margaritifera oyster, or the “black-lipped oyster,” so named for its dark, silvery mother-of-pearl coating. Amazingly, these oysters can grow up to ten pounds in size, allowing them to produce large pearls that average 8mm to 17mm.

While black and silver pearls from Tahiti are among the most coveted, these pearls can occur in a range of hues from white to black, including dark metallic greens and purples.

Akoya pearls are the most readily available type of cultured saltwater pearl. Created by the pinctada fucata oyster, or Akoya pearl oyster, these gems originate in the Indo-Pacific region, particularly Japan and China. They have been cultured the longest of any other variety of pearl, and they are known to exhibit a smooth, even luster. While these pearls also come in a range of hues from white to yellow and grey to blue, they are significantly smaller than South Sea and Tahitian pearls, averaging 6mm to 8mm in size. 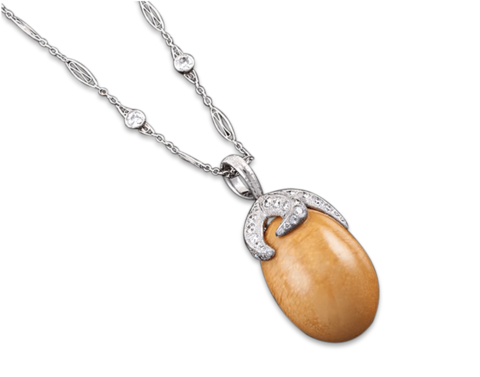 Melo melo pearls (also known simply as melo pearls) are a highly unique type of saltwater pearl. Unlike traditional pearls that form in an oyster or a mussel, melo melo pearls are created in the shell of the melo melo, a very large sea snail. This creature can be found in the region of the South China Sea, as well as around Myanmar, Thailand and Malaysia.

Unlike the gems created by a pearl oyster, clam or mussel, melo melo pearls have no nacre. Rather, they are formed from a secretion that is made up of calcite and aragonite. While their appearance is not as luminescent as other pearls, the surface of these pearls has a smooth, porcelain-like finish that is very attractive. They occur in a variety of colors, though the orange melo melo pearl is the most coveted.

What makes this pearl even more unique is the fact that scientists have not yet found a way to create cultured melo melo pearls, so all of these gems in existence today are natural. This also means they are extremely rare and difficult to find on the market.

Because of the variation that occurs in freshwater pearls, they are ideal for the collector who is seeking a more unique look. Freshwater pearls are rarely perfectly round, more often occurring in what is known as a Baroque, or non-spherical, shape. This makes them the perfect choice for a one-of-a-kind piece of jewelry. 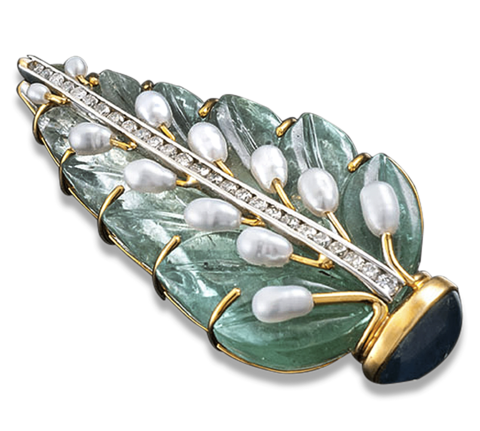